Successful industry companies adapt to changing market conditions in more and more flexible ways. In order to do this they need maximum flexibility in intra-company logistics and production. And by this we don’t just mean the usual compromise and inbetween solutions that lead to broken flows of material and inefficient processes in the long term. More and more companies are aiming for maximum flexibility, these are those that have applied growth technologies from the very beginning.

For example, take the intralogistics manufacturer BEUMER. Their company processes in raw material storage and preparation are modern, effective and economical – although the technologies applied were already being implemented in the 1980s.
The BEUMER group is a leading international manufacturer of intralogistics in the fields of conveying and loading technologies, pallet and packaging technology and sorting and distribution systems. The company was founded as a machine factory in their Beckumin, Noth Rhine Westphalia location and is still a family owned company today. BEUMER started with the production of conveyer system and expanded their product portfolio continuously over decades in the field of intralogistics. Corresponding to this, the production processes were constantly expanded, renewed and modernised.

At their headquarters in Beckum, the company had already automated their raw material storage in the mid 1980s. The intralogistics manufacturer integrated two fully automatic storage systems from Friedrich Remmert GmbH: one sheet metal storage system with barely 200 pallets and, in the immediate vicinity, a long goods storage system with around 250 cartridges. Around the two systems, various laser and saw machines are gathered, which were previously manually attached by storage employees. The deciding result of storage integration was an efficient, transparent and space-saving material stocking. Over the course of the following years, BEUMER expanded significantly; as a consequence, production output also increased sharply. After the turn of the century, the company decided on a modernisation of warehouse storage systems and a more enhanced automation of the material process in order to optimally prepare manufacturing processes for their new demands. The automation experts from Remmert thus connected the laser machines mechanically and IT-technically to the sheet metal storage system. The same was done for the long goods storage system. Here, the saw machines were also integrated. In this way, two fully automated manufacturing cells in material processing were created that enabled an extreme level of machine performance and a manual and non-manual operation.

After the first process structuring process, approximately 10 years passed again. “During this time, we have continually expanded our production output and more than doubled our sales”, says Martin Hörster, Director of Technology at the BEUMER group, describing the new wave of expansion for the Beckumer company. “Our existing flow of materials and production processes now had to be coordinated to the current service data and be modernised quickly.” Finally, the production of the intralogistics manufacturer had also gone through a far-reaching change. The storage capacity in the sheet metal had long been inadequate. The company was renting a separate hall in the meantime to ensure the availability of sheet metal. The opposite development occured with the use of long goods at BEUMER. This kept decreasing. Apart form this, inefficient work patterns had already crept in. An 8 tonne forklift was driving almost from one end of production to the other to store the sheet metal. Due to its large turning radius, the BEUMER employees often had to divert material into the aisles. “On the basis of the existing technology, we planned a far-reaching process restructuring including a complete system RetroFit,” adds Martin Hörster.

The improved material flow concept simplifies the storage of the sheets of metal. An 8 tonne forklift was driving almost from one end of production to the other to get to the input storage station of the sheet metal storage system until now. Now the sheets are unloaded from a lorry and placed on the carriage outside of the production and storage hall over a roofed intake station, which is in the opening in the hall wall. The carriage then transports the material on rails through the production hall all the way to the sheet metal storage system. There the SRM takes on the sheets and assigns them a storage space automatically. The new processes are secured by a sophisticated safety concept with traffic lights and individual photoelectric beams, which the Remmert experts developed especially for the BEUMER production. To enable these efficient storage processes, the opening of the sheet metal loading station had to be placed precisely on the hall wall that the long goods storage system was on. To put it more concretely, the sheet metal storage system’s shunt truck travels through the hall wall opening, under the long goods storage system and then finally through the hall until it reaches the sheet metal storage area. For this reason, the modernisation experts removed several cartridge spaces in the lower portion of a long goods storage tower and slightly reconstructed the system so that a smaller tunnel is within the system (photo 5). “Since the RetroFit, we load both systems extremely quickly - and we are completely independent of all further production processes,” the project leader, Hörster, says. “Numerically, that means a time saving for goods entry of at least 50 percent.”

“The complete warehousing and material preparation at BEUMER, in the meantime, is characterised by efficient and structured material and data flow,” stresses Frank Baudach, Sales and Project Manager at Remmert. “The various optimisations and restructurings enable the best results. Thus acquiring new warehouses is not necessary. Finally, our systems are extremely flexible and can be adapted again and again to new requirements.”

In summary, BEUMER achieves the following improvements with the process restructuring and storage modernisation: 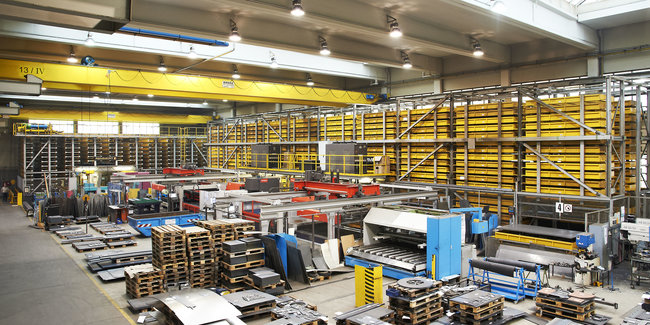