1,500 m² hall space acquired. Currently perhaps the most unusual automatic high-rack warehouse in Germany is in Lüdenscheid: There Fischer Elektronik GmbH & Co. KG have built a 17 m high honeycomb storage system at their base on a slope. The storage system, which is used to store aluminium sections at a constant humidity, is illuminated with LED lights to display the structure in the Fischer colours or the brand colours of a business partner who is a guest on the visitor platform.

“The casing sector is very design-orientated and we also have numerous clients in the lighting industry, that’s why it is important to us to present our investment in the automation storage system appealingly to our customers,” explains Patrick Fischer, Managing Director of Fischer Elektronik. The globally active company with its base in North Rhine Westphalia has around 400 employees and manufactures cooling elements and casing, among other things. While details like LED lighting fall into the category of technical gimmicks among logistical specialists, the honeycomb storage system from Remmert also had to offer lots of features when it came to the ‘hard facts’ - from silo construction on the steep slope to controlled air humidity, which stops the profiles from getting condensation on them during loading, especially during spring and autumn, which damages the outer surface. To gain valuable production space, the honeycomb storage silo was set up on just under 504 m² with a roof and wall construction outside of the production hall. Twelve retrieval stations connect the external long goods storage system via an opening leading directly to the two storey production hall and the twelve sawing machines. Airtight doors on each saw station prevent the forming of condensation on the material. To be able to integrate the high-bay warehouse, a complete hall wall had to be removed and before this 350 tonnes of material and 12 operational saws had to be moved to a building rented for this purpose. “Remmert integrated the assembly and set up into our work procedures perfectly to reduce the interuption to production to a necessary minimum. For example, all cabels were preassembled so that they could be brought in using a connection system in a time-saving way. Remmert also took on the loading of the cartridges into the storage system, which is not a given,” reports Patrick Fischer.

Despite the enormous structural expense, the integration of the high-bar rack paid off. The storage floor space was reduced by 60 percent compared to the previous solution, Fischer Electronik gained around 1,500 square metres of production space. The time savings in material handling are more than 75%. The twelve existing saws made by the manufacturers Kaltenbach and Presta Eisele were connected to the storage system on two levels by Remmert’s automation experts. Fischer Electronik also benefited from a loading in station custom-made to their individual requirements and tailor-made cartridges and integrated quick changers that guarantee particularly efficient material handling. Until now the medium-sized company stored their aluminium profiles for the manufacture of cooling elements and casing upright in steel constructions within the manufacturing hall and thus used cost effective production surfaces. In addition, the manual removal of the aluminium profiles was very time and labour intensive and sometimes led to damage to raw materials.

The new honeycomb storage system consists of a rack aisle with a total of 2,100 cartridges, each with a load capacity of 1.5 pieces. There is a storage and retrieval machine with two lifting devices which operates at up to 50 double cycles per hour. Corresponding to the maximum measurements for profiles, the storage cartridges used are exactly 3.6 m long. Some of the retrieval stations are fitted with quick changers so each station can be supplied with several cartridges simultaneously. In this way, it is possible to make optimal use of the machine even when processing small batch jobs. The PRO WMS Enterprise warehouse management software used here communicates directly with the Ikias 3.0 HOST system from the company DTM GmbH via an interface and is therefore provided with all the information on the machining processes.

“A particular challenge with this project was the expensively shaped input station. It has a built-in quick change function with cross transfer cars so that several cartridges can be prebuffered simultaneously in the storage station - for quality control purposes, for example,” reports Frank Baudach, a signatory at Remmert. The aluminium profiles are delivered in packages and placed in an unpacking device using a fork lift or ceiling crane. In this way, the Fischer employes can remove the packaging material from the profiles without great effort. Then the profiles are lowered into the previously prepared cartridges. PRO WMS Enterprise chooses the cartridges with the necessary equipment features for the material to be loaded in automatically after scanning the barcodes on the goods. The numerous features of the project quickly make it clear that Fischer Electronik wasn’t looking for a solution off the rack. “While other providers have tried very hard to fall back on standard models, the experts from Remmert looked very closely at our needs from very early on. Their competences in special machinery were certainly very helpful in this respect,” says Patrick Fischer, explaining the reasons for selecting the provider.

An overview of the results

Through the integration of the honeycomb storage system, Fischer Electronik had the following results: 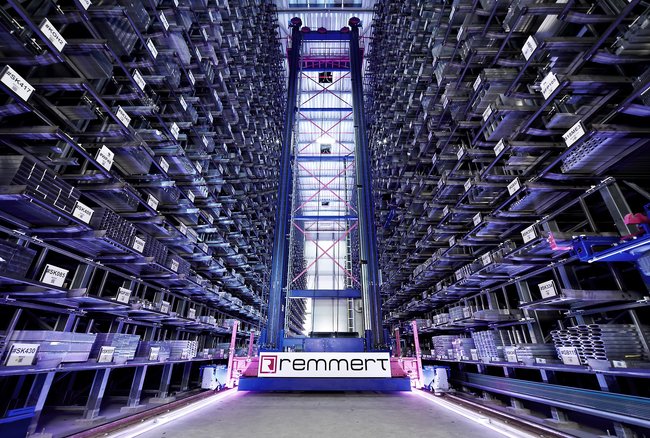